This blog documents the hopes and dreams that flood my mind in between the feeds of my twin grand-daughters Alice and Amelie. I am a semi-retired librarian, linguist, academic, living in idyllic Fingal Head on the north shore of NSW, Australia, who has travelled to Ticuantepe, Nicaragua, to be with my daughter and her babies. As a passionate linguist, reader, cook, gardener, and a keen traveller, I share the memories and aspirations  that come to mind as I hold the baby girls. In my dreams, I take them back to  Mauritius, where I was born and grew up. I share with them the experience of being a migrant in Australia, the feeling of being an outsider, and my struggle to belong. I promise them that I will inspire them with the power of being woman.

And as I feel myself getting a little hot under the collar for fear that they may suffer any injustice in a male dominant culture, I sing them a lullaby in my native Mauritian Creole to pacify us all. Then I say a few words in French, the most poetic language of all. But is it? Isn’t Pablo Neruda the greatest of poets? Alice and Amelie will speak Spanish, a language that I am endeavouring to learn. I will share with you my grammatical thoughts as I struggle with and the Spanish article system and its irregular verbsAlice and Amelie will speak Spanish as well as  English, the world’s lingua franca, a language that they will learn from their mother. I will tell them about my travels to Africa, Mauritius, Italy, France, and of my life in Fingal Head, on the banks of the Tweed River. I have already planned for them a life of success and happiness, but not without its challenges. This blog is about my hopes and aspirations in between feeds. It is about the experience of being a grandmother and the memories and dreams that holding a baby can trigger. 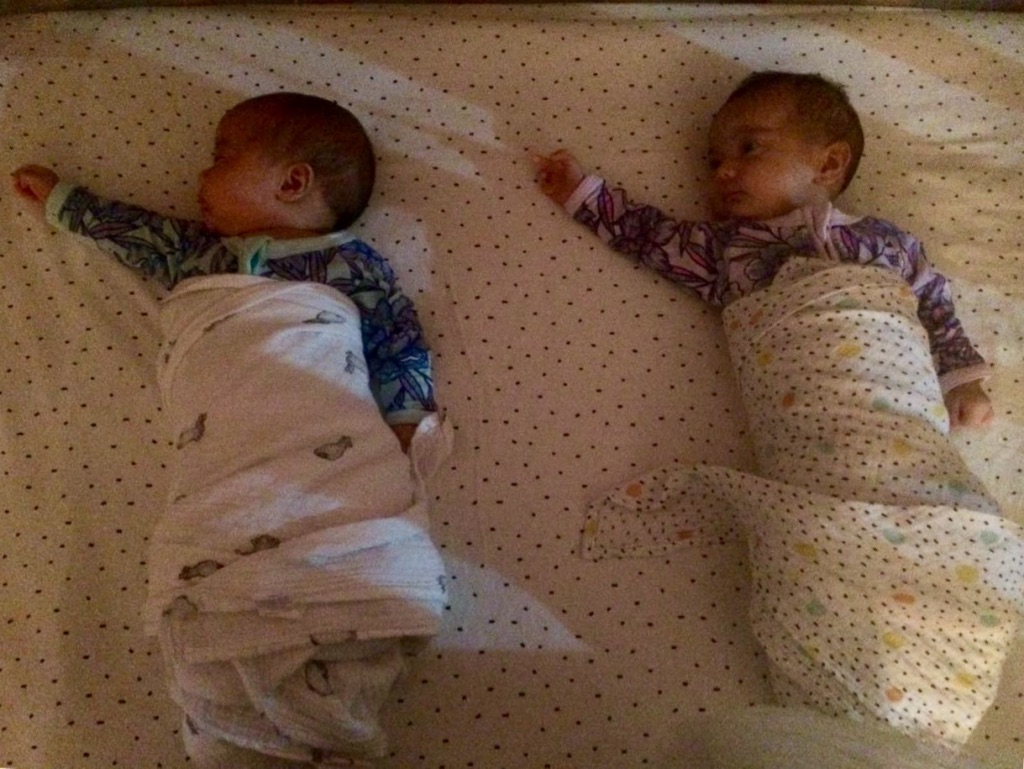 An emergency Caesarian section brought Alice and Amelie prematurely into our world weighing 1.9kg and 2kg respectively.  I had become a grandma for the first time. As I prepared to leave Australia, I had visions of humidicribs and a long stay in hospital for the bubs, but despite their precarious beginnings, they showed no signs of distress, and were sent home three days after birth. From my high falutin Australian ivory tower, I was horrified, wondering if this bordered on negligence.

The parents were given instructions to feed them two hourly 24/7. Each feed can take up to one hour, and since the girls do not necessarily wake at the same time, one feed merges into the next and the next, as day turns into night and night into day, and our heads spin with the emptiness of endless hours of waking.

In a fog of busy-ness, we have set up a production line on the kitchen bench where we prepare feeds, warm up bottles, and operate the sterilizer in an endless cycle. The twins’ bodily functions leave nothing to be desired and Nan’s premature formula is soon churned into a mustard-like goo. We change nappies, apply cream for fear of nappy rash, do up their little size-0000 jumpsuits that float on them, wrap them up again like little burritos in their muslin swaddles and put them down, till the next feed, soon …