We decided we should take a weekend off our grandparenting duties, and headed off to Granada, Ometepe and San Juan del Sur, three magnificent destinations, each harbouring its own Nicaraguan stories and histories. Nicaragua is known as the land of lakes and volcanoes, 19 of which are active, and every trip will take you to water somewhere in the shadow of a volcano. 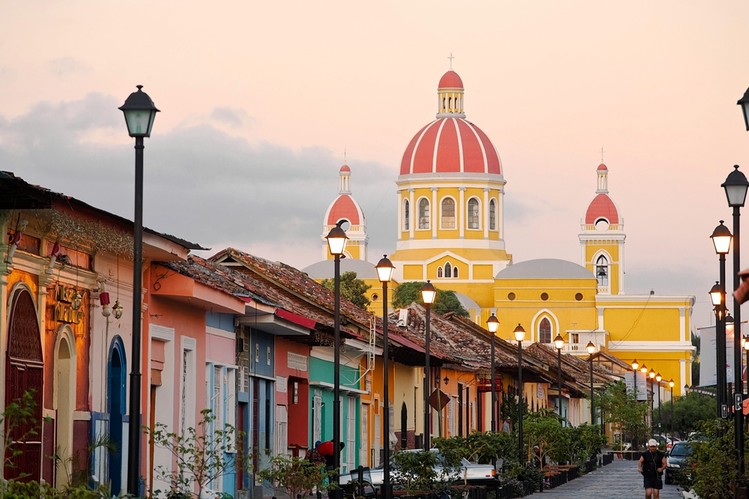 Granada, on the shores of Lake Managua, is the jewel of Nicaragua. It has the best preserved colonial architecture in the country, not having been affected by the earthquake that flattened Managua in 1972. Its skyline is defined both by its famous cathedral and Volcán Mombacho, which spewed a multitude of islets off its shores thousands of years ago. These provide real estate for the wealthy, inspire artists and attract tourists who also flock to the Mombacho Natural Reserve to climb the volcano, watch exotic birds, rare butterflies, and over 100 varieties of orchids. 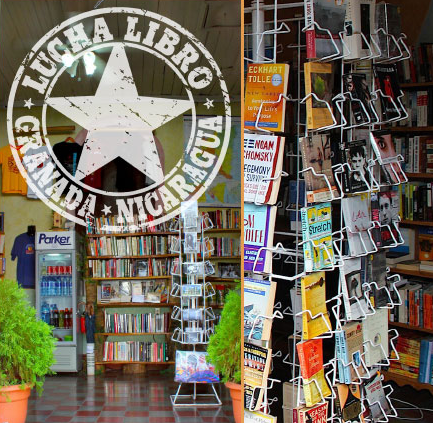 Granada boasts of world class restaurants and an array of craft shops, selling hand made cards, paintings, leather goods, and pottery. But my favourite shop of all has to be the bi-lingual bookshop Lucha Libro literally ‘Fight Book’, which houses a collection of new and second hand books in English and Spanish. These include fiction, poetry, and non-fiction, the last mostly by Latin American authors who have written about the wars and revolutions that have shaped and torn their countries. I spend hours browsing, and I am thrilled to find a whole shelf dedicated to Chomsky’s political works. There is also a small, but excellent collection of Spanish and English grammar books, not surprising given the large population of ‘gringos’ in town.

Looking for magic in the face of tragedy 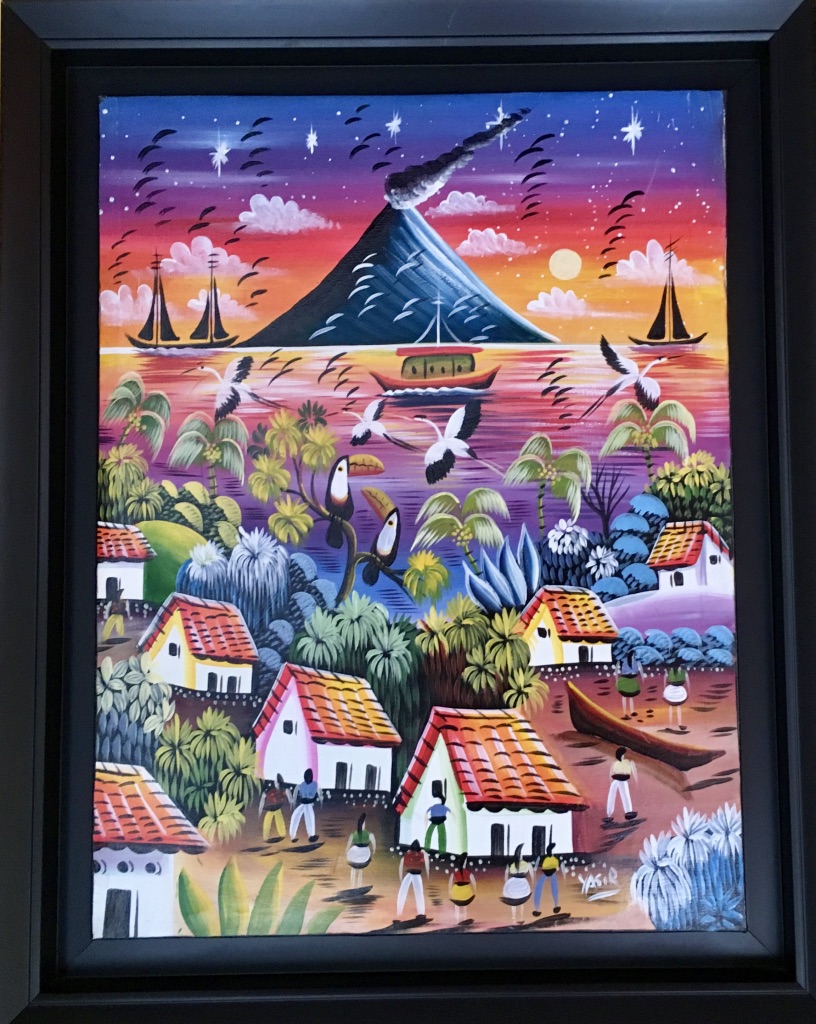 Saddened enough by the poverty that is manifest in every corner of Managua, I do not have the courage to pick up a book that will reinforce the painful reality of this beautiful but tragic country. Instead, I decide to delve into the magic realism of Isabella Allende and Gabriel Garcia Marquez. Daughter of Fortune brings home the truth that we are too often seeking an illusive dream when what can bring happiness into our lives is within reach. My melancholy whores is exquisite. I devour it in one sitting and rush back to Lucha Libro for Love in the time of cholera and One hundred years of solitude. I know that these books are already somewhere in my library back home, but the prose of Marquez will lift my Nicaraguan memories to another level, where they will transcend the din of traffic, police whistles, car alarms, firecrackers, cat fights, vendor loudspeakers shouting their wares, and the occasional gun shot. In the dream that I wish to nurture, there are no mountains of plastic rubbish, no potholes that threaten to blow your tyres, no child juggling oranges in the midst of traffic to earn a few cordobas to feed his family, no teenager in a spiderman outfit weaving through the traffic, equally desperate for a pittance, no elderly man on his wheelchair in the middle of the highway screaming his misery at oncoming traffic, no crazy drivers who weave incessantly at full speed across lanes as though desperate to reach a destination other than the present, no pedestrians forging their way in front of oncoming traffic confident to reach the other side Si Dios quiere. I hope to mingle the joy of being with my little nietas with the magic that Allende and Marquez can create in the midst of all this tragedy, all the while not wishing to ignore the painful reality of a people desperate for justice. 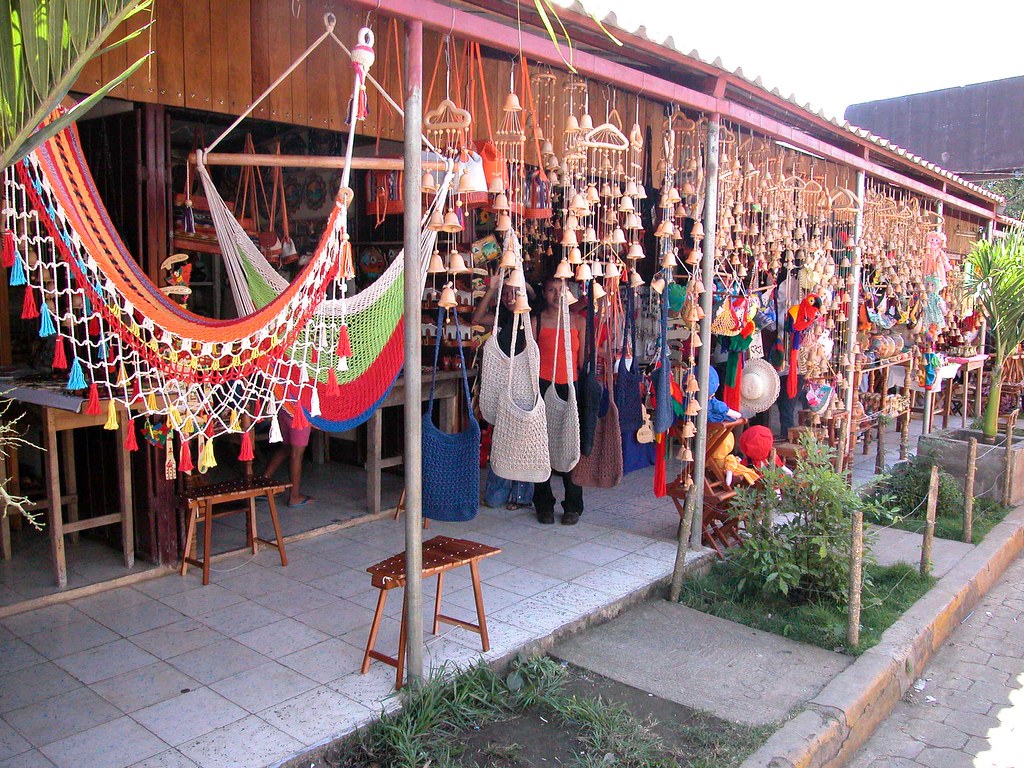 On our way back from Granada, we drive through Catarina to loiter through the handicraft village adjoining a mirador overlooking the magnificent Lago Apoyo, a vast ancient crater filled with blue warm water, a popular swimming spot. We then head for the most famous Volcan Masaya, where tourists flock to peer into  bubbling lava a few hundred metres below the edge of the crater. By night, the sulphur clouds floating above the volcano paint the sky red, boosting the value of properties that are blessed with a view. No one is concerned by the fact that the lava seems to be rising, nor by the occasional rumblings which can be clearly heard from Ticuantepe. They refer to these as ‘burps’ caused by the need for boiling lava deep down to de-gas. I am not convinced that there is no danger, but a Si Dios quiere mentality prevails. Que sera, sera, maybe a better life awaits should Volcán Masaya indeed blow its top. 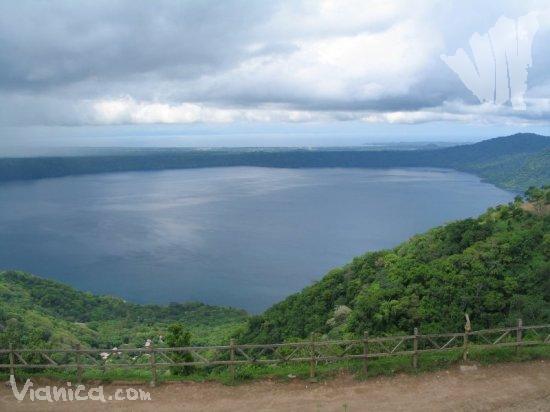 Our next expedition is to the island of Ometepe on Lake Nicaragua. It comprises two volcanoes, Concepción and Maderas, joined by an isthmus. Ometepe attracts hoards of energetic tourists who come to climb the volcanoes, swim in the lake, cycle from coast to coast, and dip into the fresh waters of El Ojo de Agua a crystal clear pool filled by an underground river. The island has its own ecosystem, where blue tailed magpies thrive in the lush, dense vegetation, as do colonies of large, rare butterflies. Given our advanced age, we forfeit the ascent of the volcanoes and opt for the archaeological museums to view some pre-Columbian statues and petroglyphs for which Ometepe is also famous.

The trip on the ferry back to the mainland jolts us back into the reality of modern day Nicaragua. A soapie blares on large flat screen for the benefit of all passengers, most of whom are engrossed in their iPhone. No one watches but me as I endeavour to tune my ear to the sounds of Spanish.

The contrasts of Nicaragua

Our last get away was to San Juan del Sur, the most famous Nicaraguan beach resort on the Pacific coast, a perfectly formed crescent with blue waters surrounded by jagged cliffs and overlooked by a colossal statue of Jesus Christ (134 metres tall). Beaches nearby are a haven for surfers, and so it is that, while queuing for some famous ice cream, we meet up with a group of Australians who have travelled all the way to San Juan del Sur to participate in a surfing competition.

Visiting these pristine tourist destinations emphasizes the extent of the contrasts and contradictions of Nicaragua.  It is a spectacularly beautiful country of pristine lakes, forests, beaches and mountain ranges, yet the outskirts of the capital, Managua, is a jungle or mouldy concrete and corrugated iron, where jagged footpaths torn apart in the 1972 earthquake still beg for repair. Fleshless stray dogs wrench at your heart, as do the scrawny horses that heave to drag overladen carts and must be flailed into submission. US policy has contributed much to the pain of this country, and yet Nicaraguans have a reverence for all things American. They are particularly crazy for baseball and Coca-Cola, and the country deals in two currencies – cordobas and US dollars. The sugar lobby has done well here, where a can of soft drink contains more sugar than anywhere else in the world. Diabetes is rife and kills them young. 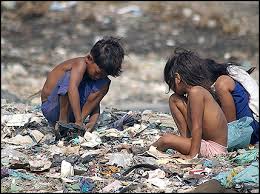 It is no wonder that magic realism has its origins in Latin America, in lands of contrasts where the denial of reality can be a means to survival.  Sixty per cent of the population of Nicaragua is illiterate, and yet this is one of the few countries in the world where poetry books easily sell an initial print run of 10,000 copies – this would be the dream of a new fiction writer in Australia, with four times the population.

Back home to roost

The drives to our various destinations are not without challenge. First you never know how long the journey will take since horse and cart are still allowed on major highways. The traffic is horrendous and every outing turns into a defensive driving course.  In the front passenger seat, I grit my teeth, clench my fists, apply the non existent brakes and swerve on my seat to avoid cars, bicycles, motorcycles, and moto taxis that come in every direction. These small vehicles manufactured in India provide a cheap and popular means of transport in the suburbs. They legally can only take two passengers, but commonly pile in half a dozen. The use of mobile devices while driving is not prohibited, it is simply not advisable. Indicators are never used and we are particularly mindful of parked vehicles that will invariably take off in front of you as you approach. Nicaraguans drive with hazard lights on by day and full beam by night. Despite enjoying our trips to exotic destinations, we are always happy and relieved to get back to the Ticuantepe house.

Much has happened there these last few weeks. In the chicken world, Dolly became broody and coveted a large bag of cement, in which she would lay her daily egg. As this would unfortunately roll out and crack, Denis built her a nest of dried banana leaves, and she instantly took to incubating the dozen or so eggs placed therein. Only two hatched, yielding another set of non-identical twins – a yellow one with a black spot on its head and a black one with a yellow spot on its head. Sometimes it seems that Mother Nature is having a good giggle. Sadly the yellow one has died of some undiagnosed condition. 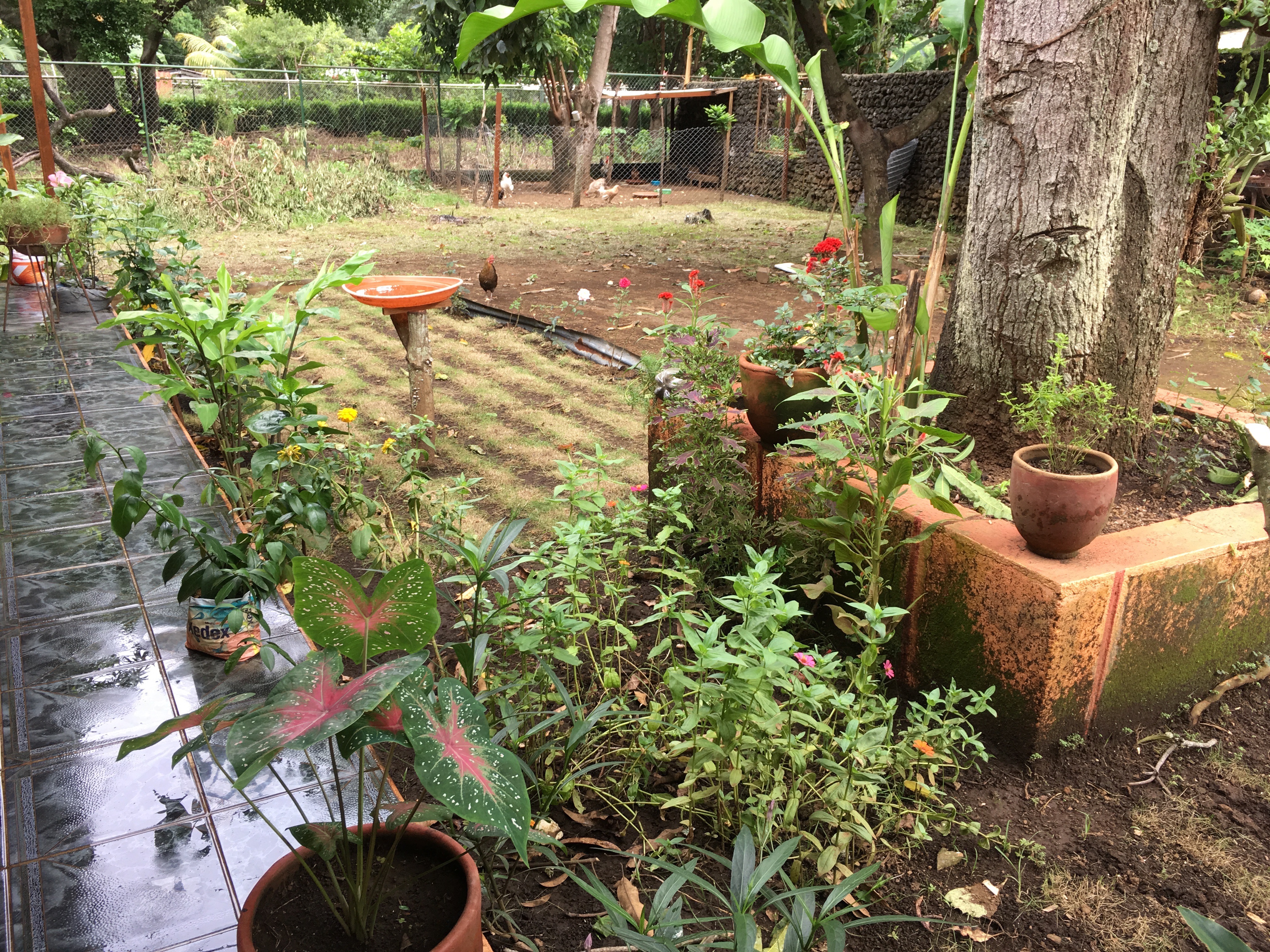 We wondered if chickens could count and of course googled the question to discover that chickens can count to six and can outdo toddlers in maths tests. We did not doubt that Dolly knew she had more than one chick, given the ferocity with which she guarded them both. Dr Google also revealed that chickens mourn the loss of their companions, and even say their goodbyes to the ones they know are about to die. Thus informed, we shared Dolly’s grief. The good news is that the black chick is thriving. She has yet to be named.

Feeling sorry for myself

By the time I post this, we will have bid our farewells. If I was Isabella Allende I would write that my tears were so abundant that they pooled at my feet, that they covered the floor of the whole house, flowed out into the garden and created a minor flood in Ticuantepe. But for once I am grateful that magic realism is more magic than realism. In reality I have not stopped feeling sorry for myself for weeks, thinking how I will miss watching my nietas grow. I want my arms to empower them with confidence, and my voice to teach them my language. I want to watch my daughter be a mother, thinking that I have much to teach her. But in reality I know that motherhood cannot be taught, that it is a skill that is reinvented with every new baby born. Deep down I know that Alice and Amelie’s Mum and Dad have all it takes to care for their little ones, and that the girls will continue to thrive in our absence.

The tears nevertheless do occasionally well in my eyes, especially as I read through my most precious Christmas gift of all, a small book from my grand daughters entitled Para mi abuela (For my grandmother). The first poem, by Kitty Tsui, goes thus:

Soy una flor, una flor que se abre en gusca del sol. Tú eres el sol, abuela, el sol de mi vida.
(I am a flower, a flower that opens in search of the sun. You are my sun, grandmother, the sun of my life.)

How can you not just love these little people that make you feel so special! À la Allende, I will claim that my tears must have left a trail from Ticuantepe through Managua, San Salvador, LA, Brisbane, and all the way to Fingal Head. But we have much to look forward to. May we meet again soon, si Dios quiere.