Whilst contemplating about the power of Nature to help relieve anxiety, a friend emailed to say how much she had enjoyed one of the ABC’s Conversations podcasts with the British comedian Bill Bailey.

As I listened to the conversation, the word serendipity came to mind. Nothing happens for no reason. This conversation further convinced me that spending time with plants and animals is a powerful way to combat anxiety.

Bill Bailey recounted how his father had wanted to ‘arm’ his son with his knowledge of birds, about where they lived, and how they lived. He wanted to inject in him a sense of curiosity about the world, a curiosity which was reinforced by his mother’s desperate wish for him to love Nature,  ‘I want you to LOVE Nature,’ she would say over and over again, creating in him a sense of being on a mission in his  communal meetings with the natural world.

Bailey observed that curiosity about the world binds us to the past, it is the best defence against depression. ‘Wanting to know’ can stave off a sense of futility, sadness and ‘morbid ennui’, it is a corrective to moments of introspection. Furthermore, wanting to pass on our knowledge gives us a sense of purpose in life. He claims to be surprised by how ‘incurious’ so many people are about the extraordinary wildlife that surrounds them. No, we are not just ‘a bubble passing through’.

On this note, I thought I should share with you the joys of paying attention to birds and other things of beauty that came across my path on a walk to the headland.

The birds are flocking back

Other than being a much needed activity to clear my mind and organise my thoughts in these days of enforced isolation, going for a walk now feels like an illicit pleasure, all the more enjoyable now that I am making a concerted effort to observe the sights and sounds that surround me.

With the absence of tourists and the ban on water sports, the wildlife has been flocking back to the banks of the magnificent Tweed River. I first notice a cormorant with wings outstretched, still as a statue on a rock, soaking up the warm sunshine. Then a pelican glides gracefully on a draught inches above the water. Such a big bird, so graceful, seemingly weightless.

In an enclosed patch of lawn, some Bush Stone-curlews stand protectively over their chick which has apparently little chance of surviving into adulthood. These birds are in imminent danger of becoming extinct, having been decimated by wild cats, dogs and foxes, and driven away from their natural habitat by human activity.

Closer to me, a pair of plovers run frantically around their new chick that keeps heading for the road, while a couple of ducks march their brood, as if on a mission.

Through the coastal rainforest

Leaving behind the river, I head towards a pocket of coastal rainforest where a sandy path strewn with yellow native hibiscus flowers leads to the heads. A black cockatoo feeding on a banksia give me a raucous greeting. Other smaller birds twitter in the bushes, while a whistling kite screeches a warning. I can also distinguish the chattering of some other birds, noisy friarbirds perhaps? At the top of the boardwalk, the ever busy brush turkey is assembling the undergrowth to create his massive nest. One has to wonder what Mum does other than mate and lay eggs. She doesn’t even take care of her new born chick, which has to survive on its own once it has scrambled its way upwards of two metres of compost to see the light of day. What a survivor! With so little caring to do, I wonder if Lady Brush Turkey has learnt the art of self indulgence in the 30 or so million years that she has been around. Brush turkeys roamed long before Wollumbin (aka Mount Warning) blew its top to create the Tweed caldera and Fingal Head.

Coming out of of the bushland, Cook Island is directly opposite. I walk to the edge of the headland hoping to catch sight of a pod of dolphins surfing the waves. If it’s late winter or early spring I will look out for migrating whales, and I may even see a mum and her calf breaching near the island. What treat it would be to spot Mingaloo, the magical albino whale who has journeyed up and down this coast for almost thirty years.

Fingal Head, which juts out between Fingal Beach to the North and Dreamtime Beach to the South, is a place of great beauty and magic. In the Bundjalung language, it is Pooningbah, the Place of the Echidna. The spirit of the echidna is said to inhabit these headlands, but it is not alone. Galiwus, the supernatural hairy man, together with his giant black dog are believed to have been roaming the area since becoming homeless. Their place of Dreaming, a large basalt cave, was blown up to build the break-walls of the Tweed River. Fingal Head however gets its name from the fabled Scottish giant Fingal who, according to legend, created similar basalt formations, namely, the Giant’s Causeway in Ireland and Fingal’s Cave in Scotland.

The children of Fingal Head Public School have their own beliefs in how the basalt columns ended up in the sea. They have painted their stories in three spectacular murals representing the Aboriginal story, the geological version, and the Celtic legend. 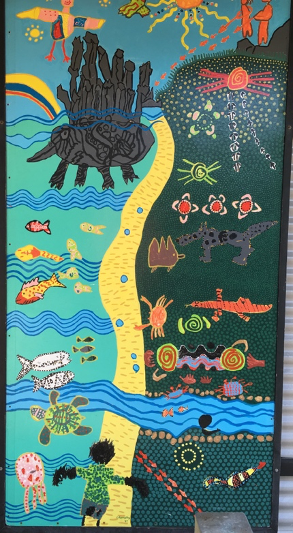 Fingal Head is indeed a magical place. It is where Aboriginal Dreaming and Celtic legend transcend geological precision. It is in this place of wonder that I come to seek advice from wise counsellors, spirits and elders who have passed on, and who are said to inhabit the area. 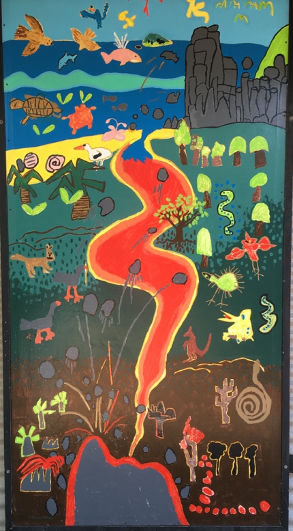 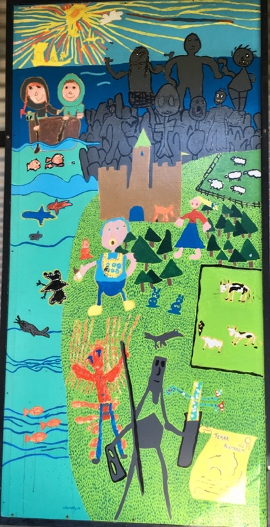 What better place to meditate and relax? The sound of the waves, the colours of the ocean, the vastness of the sky and the views of distant mountains all inspire supernatural dreaming. I sit for a while, enjoying the magnificent scenery. As dusk approaches a cloud of terns and seagulls hovers over Cook Island. They are getting ready to nest for the night. It is time to head back home. I walk down to Dreamtime Beach, past the giant in the rock, and I cannot resist a photo. 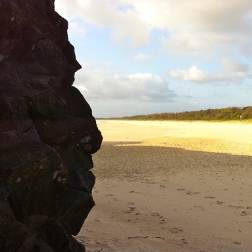 The giant in the rock

The tide is ebbing, I can walk on the hard sand. The waves are gentle now, and some will wet my feet. A kilometre or so further down, I head back towards coastal bushland and an ibis, perched high on a dead tree watches as I cross a shallow lagoon. 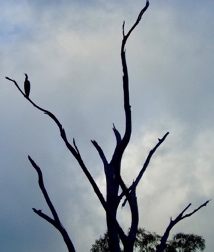 As I near home a flock of noisy kookaburras welcomes me back, laughing out loud. Are they really happy to see me, or are they warning me that Steve is lurking not far away? Steve is the large water dragon who has lived here forever. He loves to sit under the sprinkler on hot dry days. With limbs outstretched, he lifts his head to the sky and, like a child, closes his eyes to make himself invisible.

The tawny frogmouth nest, perched high in the fork of a large gumtree, is now empty. I had loved having them so close to our home, but their chick was blown out of its nest in a violent gust of wind last spring and it didn’t survive the fall. Such is life. I will miss their nightly ‘ooom-ooom-ooom’, like a mantric incantation.

But next spring will come again bringing with it new life, and the melodies of the butcher birds will fill the air once again as they teach their little ones their song.

Yes, next spring will come again, when we will hopefully all be with our loved ones to enjoy the simple things in life that we were once too busy to notice.