Three days after they were born at the Vivian Pelles private hospital, Mum, Alice and Amelie were sent back home to their house in Ticuantepe.  Ticuane meaning fierce (or tiger), and tepeh meaning hill. These exotic sounding words are from the Nahuatl language of the first inhabitants of Nicaragua. Literally, ‘hill of the fierce’, may this reflect the spirit of our two little Aussie-Nica battlers.

The two bedroom house is bright terra cotta. It has a large living area encompassing kitchen, dining and lounge with doors opening on to a verandah on two sides. It is set in the midst of large fruit trees including avocadoes, plantains, limes, mangoes, sour oranges, and tamarind. Denis is a keen gardener, and since moving here a few months ago, has planted a host of flowering plants such as cannas, gardenias, hibiscus, roses, ginger flowers, daisies, marigold, and more. Plants in hanging baskets and boxes drape the verandah, and an Oncidium orchid  (‘Dancing Ladies’) grows on the trunk of the mango tree at the front entrance.

Behind the grilled window in the photo is the cot where the girls sleep during the day. The bird bath opposite regularly attracts white throated fly catchers, hummingbirds, and a large crow who comes for his daily bath and preen. The more timid guardabarranco (turquoise-browed momot), the magnificent native bird of Nicaragua, can only be spotted in the trees further away from the house. From the verandah, we can also watch small squirrels scampering along the large plantain leaves and jumping from tree to tree in their hurried hunt for food. All this is lovely to watch as I hold my grand-daughters in turn and hum nursery rhymes.  ‘The wheels of the bus go round and round, round and round, round and round ….’ the only one that I can sing in tune and which has become like a meditative incantation interrupted mostly only by birdsong.

I am grateful that Alice and Amelie are becoming attuned to these sounds and not the din of traffic, car horns, sirens and fireworks which is the norm 24/7 in central Managua. In the rural environment of Ticuantepe, the day starts with the crowing of roosters, the literal wake up call of many Nicaraguans who will be taking their wares to market, and the day is filled with birdsong, and the occasional cackle of a hen announcing her egg.

In the corner of the property there is a chook pen with half a dozen chickens and one rooster. Most of the girls have acquired names to suit their personality. We have Britney, Kylie, Beyoncé and Tess. Mariah and Whitney, who were the only ones not laying, became fried chicken for Angie’s birthday. Life is tough here and every creature must serve a purpose We are comforted in the knowledge that they had happy, stressless lives.

The one and only rooster, Justin, passed away on our first night in Ticuantepe due to an impacted crop, a fate similar to that endured by Dannii a few weeks earlier. It was an eventful evening, one week after the twins were born, when parents and grand parents were still struggling to adjust to their needs. Justin’s condition was such that it necessitated rushing to the pharmacy to buy a syringe and administer a dose of paraffin oil to clear his oesophagus. But it was to no avail, and he soon expired at the front door. In between Justin’s dry retching and the babies’ gurgling, to which we were still getting accustomed,  we were for a while at a loss on which way to turn.

Justin’s passing was a sad loss, as he was a good rooster who ensured that his ladies produced a steady supply of fresh organic eggs. A replacement was needed, and the men drove to a poultry farm in La Concha to buy a new rooster. They were tempted by Donald, an impressive looking bird with a clump of yellow feathers swooping over his crest, but his likeness to the president fetched a prohibitive price. However, the next best one has settled in nicely, and has assumed his responsibility with such gusto that his predatory behaviour has earned him the name of Harvey.

The yard with its large trees, patches of grass and bare earth brings back memories of the place where I grew up in Quatre Bornes. We too had chickens. In fact, we had quite a menagerie of geese, turkeys, goats, monkeys, cats and dogs, each creature with its own personality, some nice, others not so pleasant, but all an integral part of our lives.

The geese, Donald (no kidding about the name) and Daisy, ruled the roost and guarded the property more fiercely than any dog. These birds pair for life and deeply mourn the loss of their partner. Donald wept daily in front of a mirror in my parents’ bedroom, where he mistook his own image for Daisy, whom he could not longer reach. He became so aggressive and vicious following her loss that he ended up in the local goal and my mother had to bail him out. But that’s another story. 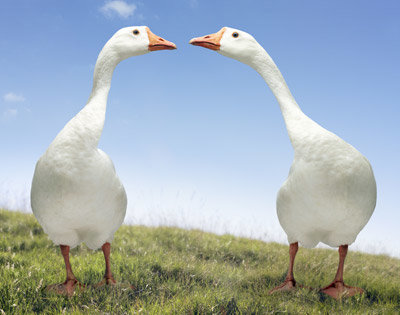